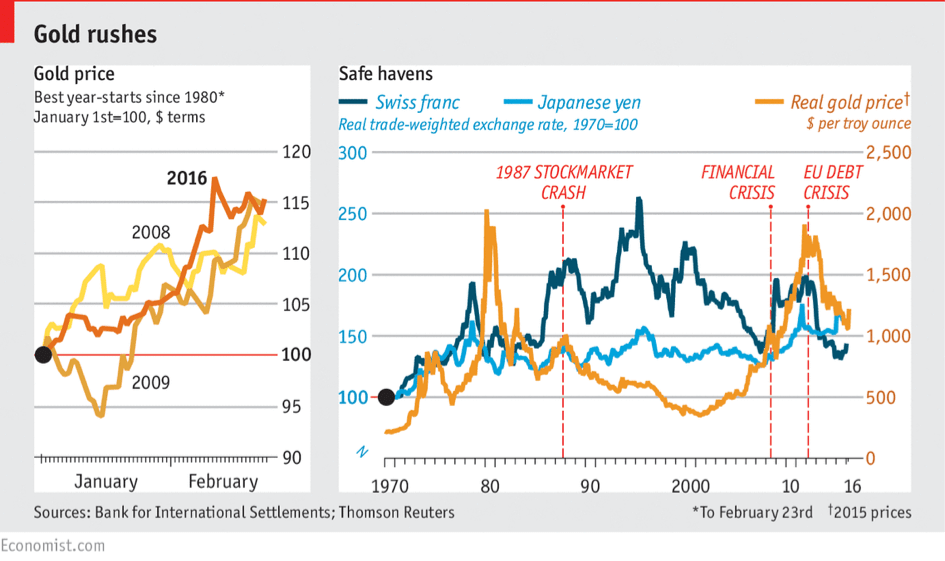 Home | Insights | Investments | A Future Outlook on Gold and Oil – Worth Investing Now?

A Future Outlook on Gold and Oil – Worth Investing Now?

Oil and gold are two commodities that run our world. Gold, on the one side, is a safe haven and an indicator of how investors perceive the economy, while the other – oil ‘black gold’– is the elixir that powers our global economy, with profound uses ranging from propellant for cars and cargo vessels to uses in power plants and the manufacturing of plastic products. Both commodities have seen strong price movements in recent years and months, facing price pressure, political exposure and investor scrutiny. We want to take a closer look at these two major commodities and their future outlook, finding an answer to the question: Is it the right time to invest?

Gold and sovereign bonds issued by relative stable governments such as the US, UK or Germany have always provided safe respite for investors when stock markets or economic performance runs into problems. Research by the IMF finds that bad news regarding the economy can cause the price of gold to jump as the demand bandwagon takes off. In this respect, it has been a good year for gold so far. Geopolitical conflicts and continental economic challenges interspersed with moves by big central banks to impose negative interest rates on commercial-bank deposits have made gold an attractive store of value. Prices have risen around 18% in the first quarter of 2016, indicating the best start to a year in over four decades. However, the gold market is a complex one that is driven by a series of factors including supply and demand and administrative actions apart from general investor sentiments. The current price surge can, in part, be attributed to the following ‘fundamentals’: Now, what can you take from this? Historically, putting your money in gold when times get rougher was a strategy that generally worked. But this was not always the case. During the 1980s and 90s when gold prices were floundering, treasury bonds became the safe haven of choice. There is also criticism regarding gold’s supposed reputation as an inflation-buster. In fact, the American investment management firm Vanguard argues inflation-adjusted historical gold prices have not exactly trumped inflation in the recent past. However, unlike other commodities such as oil, the price of gold indeed tends to rise in response to stock market shocks. We could be in a similar position right now. Due to the political and economic environment, it is expected that gold has not hit its full potential as of today. The current run for gold illustrates that more and more investors see a real chance of deflation or recession – putting some of their money into gold.

Electric Cars Could Wreak Havoc on Oil Markets Within a Decade What Elon Musk and Tesla achieved is good for the environment – but not good for oil producers or oil companies/investors. The video illustrates how our economy is transitioning from an oil economy into an economy focused on renewable energies. This transition does not only apply to electric cars for private usage but also other commercial applications like cargo ships, public transport, architecture and substitutes for plastics that are produced with oil. Some examples: Also, institutional investors are re-focusing their investment away from the oil industry, reducing their shares in oil-producing companies like Exxon or BP, and investing it into green energy. The most prominent example for this is the Rockefeller dynasty who made their billions in oil and have now divested all their holdings from the oil sector. Furthermore, the Saudi government is working on plans for economic growth beyond oil. Now all of this seems like trouble for oil – and it is. But there is more to it – apart from highly industrialised nations such as India and China, global demand conditions are looking bleak. The relative surge in oil-demand across Europe in 2015 is unlikely to repeat over the ensuing period. North America’s fuel-efficiency standards and South America’s economic slowdown are restraining consumption.

Can OPEC work together again?

Oil producers are not turning off the taps as fast as people expect. Saudi Arabia, which used to curb output to rescue prices, now refuses to play this role and instead is focused on driving high-cost producers out of business. According to current estimates, more than 80% of the world’s proven oil reserves are located in OPEC Member Countries, with the bulk of OPEC oil reserves in the Middle East, amounting to around 66% of the OPEC total. At OPEC meetings, reaching a firm consensus on a potential production freeze is now less likely than ever before, serving as a testament to the rifts between member countries. With the reintegration of Iran into the global export arena, Saudi Arabia – the second-largest OPEC member nation and strategic rival to Iran – is now said to be more sceptical than ever about an output freeze. This is further exacerbated with its ongoing tussle with Russia for market share. So the OPEC members are currently more about infighting than finding a solution to a common problem. It is now tougher to influence markets through output quotas like in the past. This is greatly affecting heavy oil-producing countries such as Angola, Brazil, Nigeria and Venezuela as well. So to sum it all up – there are not a lot of positive trends fostering within the oil landscape. Being in a difficult position, the outlook is unequivocally grim. Prices are expected to remain within the current low or plummet further since demand will not rise in the short or medium-term. Whether or not oil prices will once again stabilise is primarily dependent on collective OPEC member activity. If instead of pushing a group effort, member nations take matters into their own hands, swayed by political motives, the future does not look golden for oil-producing countries or companies.

Is it a good time to invest?

Both gold and oil are going through interesting times – gold, on the one hand, is in high demand and prices are rising, while on the other hand, oil is overproduced and prices are falling. So, is this for you? And is it the right time? If you hold a relatively smaller portfolio that can be diversified without directly moving onto commodities, do so as it does not really help you to diversify your portfolio and incur holding costs with no natural return. If, on the other hand, you have a larger portfolio with investments in varying asset classes such as GILTs, stocks, and liquid cash (maybe with alternative investments such as real estate as well), then gold could be important for you since you need to put some money in ‘safe haven’ investment to trim the downside. As for oil, the situation is different. As mentioned earlier, it is very hard to predict the oil price and investment in tangible oil holdings itself is near-to-not possible (unless you own a cargo ship) and can only be done through futures or indirect investments in oil companies. Both have performed badly in recent years. To bet on a rising price now has a certain upside potential – but keep in mind that doing so is nothing more than raw speculation. If, on the other hand, you have invested in a lot of oil companies through stocks it might be a good time to hedge your investment by going short. *** We hope this gives insight and some help on the current commodity trends. Here at Holborn Assets, we carry the requisite experience and expertise to help you identify whether oil and gold investments make sense for you and if so, to help you get started with your investment drive. To learn more on investing in gold, oil and a host of other investment products, get in touch with a qualified independent financial adviser today.